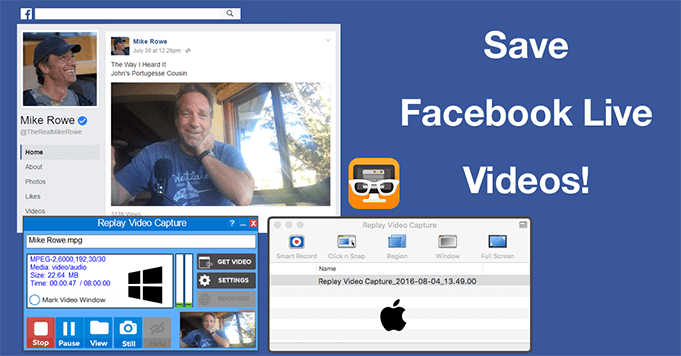 Facebook Live is a phenomenon sweeping the connected, live-streaming world we live in today. Everyone from celebrities to close friends, politicians to musicians, and everywhere in between can broadcast right from the camera on their smartphone.

While Facebook Live videos are real-time in nature, those watching the live streams are restricted to the access that their favorite broadcasters allow. Replay Video Capture is the only way to create high-quality recordings from Facebook Live videos, making it easy to watch live streaming moments anywhere, anytime and on any device, even after they are removed.

Head for the Live broadcast you want to record, either via your News Feed or the broadcaster’s Facebook Page.

Replay Video Capture will automatically find the Facebook Live video window in your browser – all you have to do is hit Record!

Unlike other screen recording programs, Replay Video Capture is designed for the highest quality video output possible and has recording capabilities up to 100 frames per second. It’s the fastest, most powerful way to legally record ANY live streaming content from Facebook Live and save it in a high-quality format.

Remember: if you can watch it on your computer screen online, you can capture it forever!

Miss out on a great broadcast on Facebook Live? You can use Replay Media Catcher to download the archived live streams directly from the publishers’ Facebook page!