Fresh Baked Updates! Get Your Fixes & More While They’re Hot…

We’ve got some great news for people who love fresh updates: we’ve just released a ton of enhancements and fixes to some of your favorite products. That means you can get the latest versions of Replay Media Catcher, Replay Converter, and Replay Radio, and enjoy them now even more than ever.

You can update your Windows software anytime, and enjoy your products working even better than before.

We’ve added some fixes that allow for even higher quality streaming.

Our latest updates mean that now you’ve got even better download capability from your favorite YouTube channels.

We’ve also added a ton of fixes and improvements to enhance the overall performance of Replay Media Catcher.

We’ve enhanced both the speed and performance of Replay Converter, so you can convert your favorite audio and video files even faster than before, and at top quality.

Don’t want to miss your favorite online radio show or podcast? We’ve made enhancements to the recording algorithm, so now you get even better recording compatibility with a variety of stations. You won’t have to miss a single one of your favorite shows!

Don’t miss an update… Get them while they’re hot! Any questions? You can reach out to our awesome support team anytime! Streaming media like music, movies, and shows online has been around for decades now, but has reached new levels of popularity with the introduction of popular (often paid) services. As cable-cutting becomes more intuitive and budget-friendly, traditional cable subscriptions are increasingly more complicated and pricey. It’s a no-brainer why entertainment enthusiasts are choosing options for streaming media online.

Because no one streaming service is created equal (and can have frequently rotating collections of content), we created the software in Replay Capture Suite to save it all. If you can stream it online, you can record and save it forever, no matter the device or internet connection. Here are our favorite streaming sites to record media online:

A clear winner in many streamers’ eyes, Netflix is powerhouse in the online streaming industry. With so many titles available at any given time, you can stay entertained for hours (as long as you have internet and the titles you want are still there).

Spotify is a force in the music streaming world. With 20 million songs from thousands of artists in every possible genre, there’s endless music to enjoy – as long as you have a WiFi connection.

Lucky for you, listeners can download music from Spotify and save every track into individual, perfectly-tagged songs using Replay Music – this makes it simple to listen to all your favorite music, anywhere. All you have to do is open the program on your computer, start the music, and click “Record” to record any music from Spotify.

Get Replay Music for PC.

Soundcloud gained its popularity in the MySpace era of the mid-2000’s with their simple platform for musicians to upload and share music. Naturally, this also attracted a lot of listeners, and today the streaming site boasts over 175 million monthly users.

Replay Music is the most powerful way to record Soundcloud music directly to high quality MP3 files. Advanced recording technology captures only the music you want to hear, and never any system sounds or background noises.

Get Replay Music for PC.

YouTube is home to sensation after sensation, music videos, full video series and even exclusive live streaming events. The entertainment doesn’t have to end when your WiFi fails you or your favorite channel removes some of its best content — Replay Media Catcher lets you download videos from YouTube so you can watch again and again.

With downloads that run 10 times faster than playback speed and lightning-fast conversions, Replay Media Catcher makes it easy to download from YouTube and automatically convert these videos to MP3, WMV, AVI and more. Plus, with a live stream monitor feature, you can actively track and record any YouTube live event.

Get Replay Media Catcher for PC.

Get Replay Media Catcher for Mac.

Have any questions about how to save online media from these awesome streaming websites? Contact our Support Team at any time. 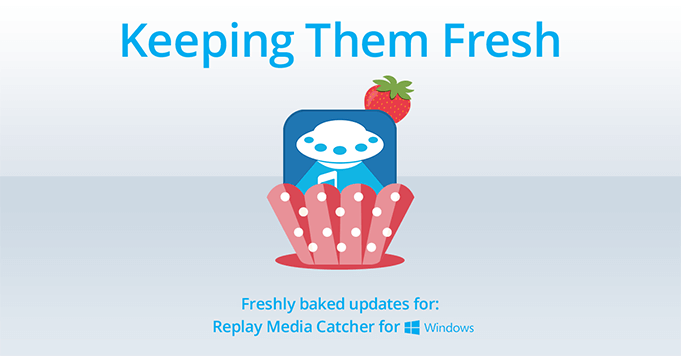 It’s another great day for updates!

We’ve recently launched some great new enhancements to Replay Media Catcher for PC. Update your software at any time to take advantage of these additions and improvements.

Any questions on these recent updates? You can reach out to our Support Staff at any time! 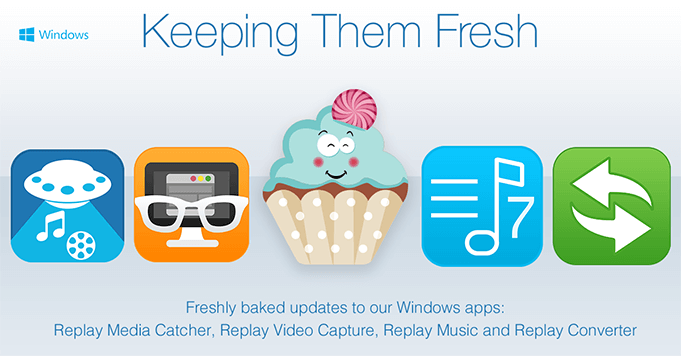 You can update your software at any time to take advantage of these additions and improvements.

Any questions on these recent updates? You can reach out to our Support Staff at any time!