How to Record the Clinton vs. Trump Presidential Debates 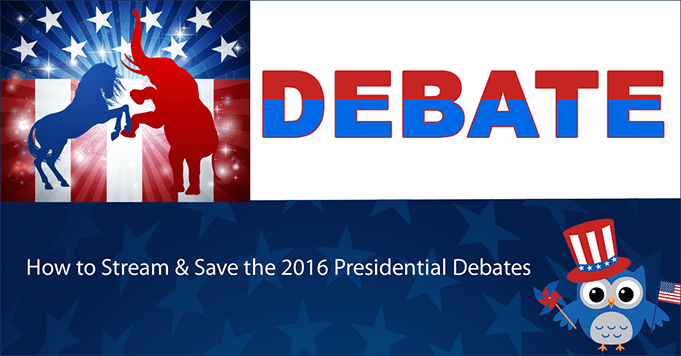 The upcoming series of debates are anticipated to be the most heated, most intense, and most highly-watched of all time. With a lot of voters tuned in, Hillary Clinton and Donald Trump will finally go head-to-head with the first of three debates before election day on November 8.

The first debate will be held this Monday, September 26 at Hofstra University in New York. Consisting of six 15-minute discussions on major topics chosen by the moderator, NBC’s Lester Holt, Facebook and Google are even participating this year to provide data on the topics and issues, what people are saying about the election as a whole, and much more.

Where to Live Stream the Debates

Major news networks and cable news channels are set to broadcast the debate, but for all those cable cutters and online streamers out there, there are several great sources for live streaming the debates. You can use Replay Video Capture to record the debates from any one of them!

YouTube: Catch the live streams directly from YouTube*, where many networks and channels are planning to capture every debate.

MSNBC Live: If you’re already an MSNBC subscriber, you’ll have full access to every live streaming debate this election year right from the website.

Facebook: The social platform’s new Live platform is likely to be one of the more popular sites for streaming online, due to access and ease of use.

You can also find live streams on the debates on:

Our best-selling media recording software makes it simple to create incredible quality videos of every 2016 Presidential debate, so you can watch on your own schedule. Plus, it’s the only program of its kind that records online video 100% legally.

Get Replay Video Capture for PC

Get Replay Video Capture for Mac