The Best Titles Coming to Netflix in September 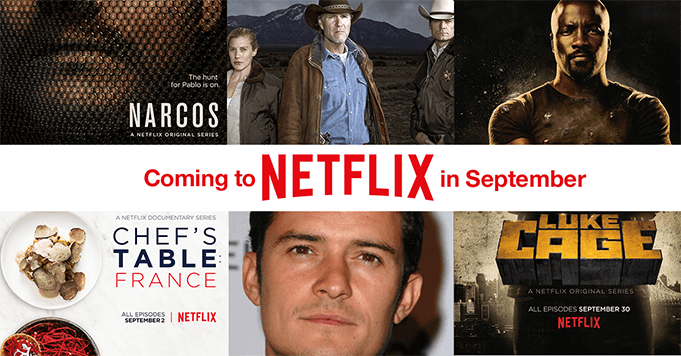 Out with the old and in with the new! Every month, Netflix shuffles in new content (and gets rid of old favorites) as part of their constantly rotating catalog of media. Lucky for entertainment streamers everywhere, Replay Media Catcher for PC exists so you can watch and download from Netflix before your favorites disappear.

In the meantime, here are some of the top titles coming to Netflix this month (September 2016). Be sure to save them while you still can!

Pablo Escobar is on the run in Season 2 of Netflix’s original series, Narcos. The breakout, kingpin-style cartel drama will conclude the infamous drug lord’s story in the upcoming second season – the final month of his escape. You can catch the next 10 episodes starting September 2, 2016. Download every intense moment with Replay Media Catcher.

Like westerns? You’ll love Longmire. Following the life of an old-school sheriff who recently lost his wife, and based on the Walt Longmire Mysteries series of mystery novels, this A&E series is full of drama, crime and justice. Starring Robert Taylor and Katee Sackhoff, this is a series you definitely won’t want to miss saving with Replay Media Catcher.


Based on the Marvel Comics character and set in the same universe, Luke Cage is a dark crime show about a former convict with crazy, super-human strength and unbreakable skin who now fights crime round the clock. If you like superheroes and fighting for justice, definitely keep an eye out for this show at the end of September.

Foodies around the world are about to get another dose of delicious, mouth-watering television. Chefs get the chance to share their own story in Chef’s Table, a Netflix original series. Get a look behind what motivates, inspires and challenges incredible chefs in France with the upcoming season, and download every episode with Replay Media Catcher.

The first season of Easy premieres near the end of the month, starring Orlando Bloom, Malin Akerman, Marc Maron and Dave Franco (just to name a few). While there aren’t a lot of details on plot points, its eclectic cast of amazing talent means this comedy is sure to be a smash hit. Or at least worth checking out.