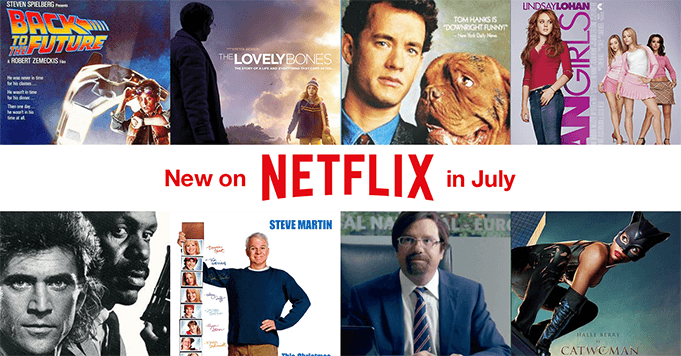 While we may still be in mourning from Netflix‘s latest round of content cuts, there are things to be thankful for. In this case, that means a fresh batch of movies and TV shows to dive into (even if it is for a limited time…).

This July, we have a number of higher-profile films and a handful of new series seasons available starting the first of the month. Check out some of the top movies and shows new to Netflix in July, 2016 – you can watch and save them all with Replay Video Capture!

Science-fiction meets adventure meets comedy in the classic 1980’s trilogy, Back to the Future. If you’re into time travel, quirky scientists and amazing 80’s references, you definitely want to get your hands on this series.

Based on the best-selling novel by Alice Sebold, The Lovely Bones is a heartbreaking but beautiful story of a young girl watching over her family from beyond. Bring tissues!

Tom Hanks plays Turner, a by-the-books kind of cop, while Hooch is a slobbery and chaotic, yet lovable dog. When the two come together in Turner and Hooch, you know it’ll be a mess.

Some of Danny Glover’s finest moments come from the Lethal Weapon movie franchise. Two tough-as-nails L.A.P.D officers are partnered up to do some good – one of them a seasoned cop and the other a suicidal maniac.

6. Cheaper by the Dozen

Comedy genius Steve Martin stars in Cheaper by the Dozen, a movie about (you guessed it) a family with 12 kids. With an incredibly full house and ambitious minds sparking, there’s tension, laughter and a few heartfelt moments.

David Cross plays the increasingly unlucky and awkward Todd Margaret, a man who has moved to London for a job he knows nothing about. Any fan of Arrested Development won’t want to miss this one!

There have been a few versions of Catwoman over the years, but this time it’s Halle Berry’s turn. The 2004 movie follows the classic DC Comics storyline of the mild-mannered employee by day, superhero by night. Not great, but entertaining.

Download Replay Video Capture to record and save all of your favorite Netflix movies, shows and more before they’re gone.