Here’s Where You Can Watch & Record Super Bowl LI Online 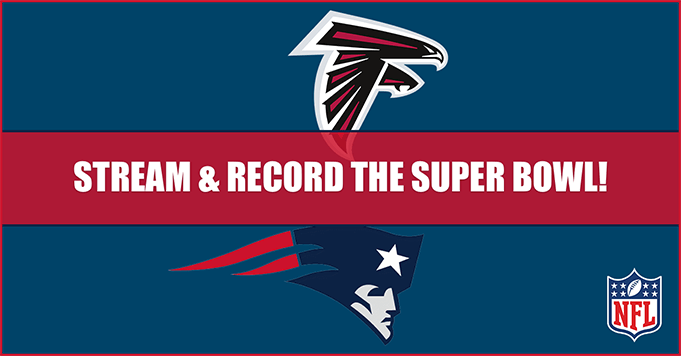 With only two teams finally left in the running, we’re counting down the days to Super Bowl 51! The Atlanta Falcons will be moving forward from the NFC to go head-to-head with the New England Patriots. No matter who you’re rooting for, experts agree that any Super Bowl matchup is going to put on quite the show.

And, with Luke Bryan singing the national anthem and Lady Gaga owning the halftime show, it’s an event you seriously won’t want to miss. Cable-ditchers and cord-cutters may be worried about where to watch Super Bowl 51 without a TV, but have no fear! We have the information you need for how to live stream the Super Bowl online this year.

Where to Watch the Super Bowl Online

Super Bowl LI will be live from NRG Stadium in Houston, Texas on February 5, 2017 starting at 3:30pm PT / 6:30 p.m. ET, and streaming live to connected devices provided by Fox Sports Go for every last touchdown. Over 110 million people are estimated to tune in, either via television or online, making it one of the most highly-watched events of the year.

For fans who want to get as close as possible, Fox also recently announced that it plans to introduce a new feature, Be the Player — using Intel technology and cameras all around the stadium — that will allow viewers to check out instant replays from a reconstructed, first-person perspective of the players themselves.

“Now you are able to do something that fans have always wanted to do. We’ll be able to position this virtual camera view in a way where it looks like you’re seeing what the player saw.”

– Jeff Hopper, General Manager of Strategy and Marketing for the Intel Sports Group

How to Record the Super Bowl

Check out the Replay Video Capture User Guide for more in-depth information on how the software works, or reach out to us if you have any questions.