The Top Events to Stream & Save From ESPN3 This Year 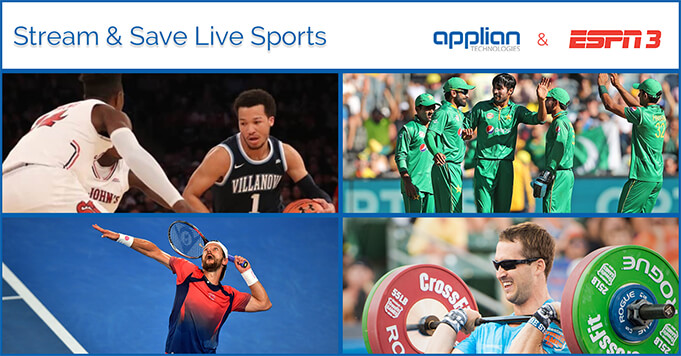 ESPN3 is an online streaming service that focuses both on live streaming and replaying global sports events to fans in the United States, and beyond. Featuring coverage of sports events like FIFA World Cup global qualifiers, North American Soccer League, NCAA college football and NCAA college basketball, Major League Baseball, competitive eating contests and more, ESPN3 is a favorite for fans of just about any official sport.

See everything else live streaming on ESPN3 with their interactive schedule right here. Watch and record all of these awesome live streaming ESPN3 experiences using the power of Replay Video Capture — you can capture every major sporting event and save them forever!

We’re already in the thick of the 2016-2017 International Cricket season, with highlights hit in Bangladesh’s first ever Test victory over England, South Africa’s third consecutive Test series victory against Australia, and many more intense moments. Don’t miss the rest of the season, wrapping up in April – you can live stream International Cricket from ESPN3 online, and record every match with Replay Video Capture.

More than 11 million people across the United States tuned into the March Madness tournament in 2016, helping to make this year’s NCAA College Basketball season even more widely enjoyed. With the season well underway, you won’t want to miss any critical game before the Final Four are decided in Glendale, Arizona on April 3 – live stream college basketball from ESPN3 online and record every game with Replay Video Capture!

Time to get out those oversize tires and get fit – The 2017 Reebok CrossFit Games are just a few months away! For those who get their kicks pushing themselves to the physical limit, you won’t want to miss any of the qualifying events happening this summer. Fans can live stream the 2017 CrossFit games from ESPN3 online and record every muscle-busting moment with Replay Video Capture.

In some historic news, India will be hosting the next FIFA tournament (their first time ever hosting an event like this). In the 2017 FIFA U-17 World Cup, 24 teams will qualify for the final tournament – one from host country India, and 23 from six separate continental competitions. Be sure not to miss any of the qualifying rounds happening this Fall — you can live stream the 2017 FIFA U-17 World Cup on ESPN3 and record it all with Replay Video Capture.